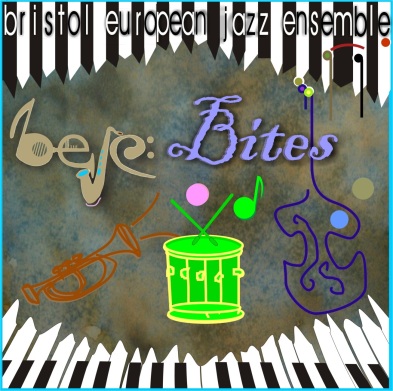 O ORDER A COPY EMAIL bigbromo@yahoo.co.uk or find one at a gig!

Since ‘Live At The Fringe’ there’s been one change of personnel; Paolo Adamo replaces Marco Anderson on drums. The album builds from the first in a project to convey a sense of pan-European identity through the mainly North American Black idiom of modern jazz as played in the neo-renaissance city of Bristol by jazzers from across the continent. Of course most music, and perhaps especially jazz expressions -such as this album- indebted to John Coltrane, is a spirit-voice far transcending political borders.
The samba theme continues with ‘Redfield Carnival’, an attempt at writing a festival-friendly summer hit. The melody dropped into my head on my usual morning run round Netham Park in Bristol in February 2015. ‘Forward and Back’ was composed at the same time. I hope the halting New Orleans-ish funk interspersed with the relief of swing conveys the title’s meaning.
The other three pieces inter-connect. ‘Justin’, composed in March 2014 draws on my love of Middle Eastern music. I learned later that the name of the scale used is (mostly) ‘Maqaam Kurd’. I associate it with my memory of Syria through which I walked on a lone Bristol to Jerusalem pilgrimage in 2005. The rhythm section give it a Milesian twist, I imagine, and the mood speaks of beauty and tragedy.
‘Hymn For Mostar’ composed in 2005 recalls the cemetery of un-weathered grave stones of mainly Muslim young men who defended the ideal of a cosmopolitan Europe when attackers from all sides were bent on narrower nationalisms. As divisive ideologies stride again and the European project falters, we’d do well to heed the warning Mostar’s fate offers.
‘Chai Za Dvoye’ (Tea for two) is an arrangement of a Montenegran tune learned from a woman in a mountain cottage who rescued me as I struggled at dusk in deep snow to find Ostrog Monastery.
Any other meaning you may read into the music comes from the musicianship of the performers who, as improvisers, bring to life the modest structures the composer offers them.
I’d like to thank Anne and Zoe for supporting me as a musician. The album is dedicated to the memory of Dobri Beljkašiƈ, eminent Yugoslav artist, refugee from Sarajevo and my neighbour, who passed away as this album was being put together.
David Mowat trumpet (tracks 1, 3, 5) and flugel horn (tracks 2, 4)
Julien Alenda alto sax
Paolo Adamo drums
Pasquale Votino double bass
Anders Olinder piano
All compositions and arrangements ©David Mowat