BEJE has had a less busy year in 2017 than in the preceding three on account of David Mowat’s focus on his Arts Council England-funded project ‘Longing Belonging and Balfour’, a music with spoken word take on The Balfour Declaration of 1917 which has traveled around the UK. There’s some crossover with BEJE as Knud Stuwe is involved as arranger composer and oud player and the jazz has seeped into the Yiddish song and Arabic maqaams.

After The Bristol Music Club gig in January came a gig at a hot pub party with Senegalese kora Master Moussa Kouyate, then a Bristol Fringe gig at the same time as the Bristol Jazz and Blues Festival in March and a Colston Hall gig in May (where the video and recording were done). These last two were in stark contrast of personnel, with Julien  on tenor, Paolo drums Daan keyboards and Federico bass, whilst the May gig Jon Clark was on drums, Al Swainger on bass and Len was on alto and soprano.  There were more recent originals played in Colston Hall than the grooves we layed out with Moussa. 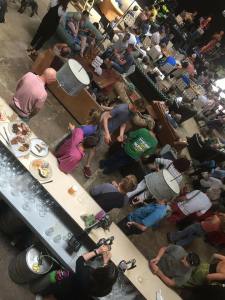 In May at The Stroud Jazz Festival BEJE went down very well and in June a large audience at The Portishead Speakeasy loved us. Hostess-singer Kate O’Loughlin wrote after “What a joyous night last night.David Mowat and BEJE played extraordinary takes on regular Jazz standards along with some very moving, contemporary own compositions, beautifully executed”

Despite a long summer gap and one one on one rehearsal with bass dep Guilaume our gig at The Bocabar in Glastonbury in September was as free-flowing as ever with bassist-promoter Adrian Smith writing “It was a great gig on Friday 8th at the Bocabar with BEJE  – Beautiful compositions and some really top notch playing. The audience loved every minute of it. If you get a chance you should definitely go see the Bristol European Jazz Ensemble”

By request we were invited back to the slightly less pristine (having had us jazzers once already) classical Bristol Music Club, developing a taste for reflective jazz and story telling in